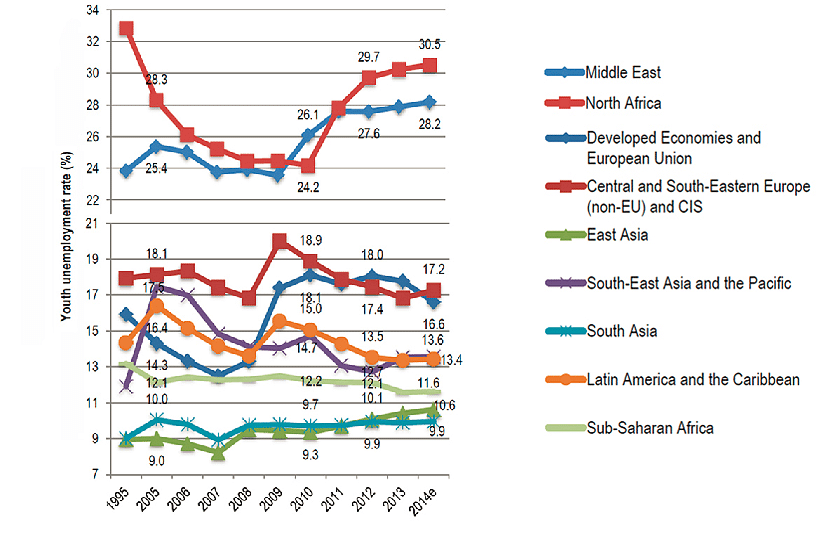 The figures speak for themselves: 73.3 million of the 200 million globally unemployed are young people (aged between 15 and 24). In two-thirds of European economies, youth unemployment remains above 20%, and more than one in three unemployed young people have been looking for work for more than a year. Work, if it comes, is often below their expectations for a quality job. The Middle East and North Africa have had rates of youth unemployment close to 30% for decades, and these remain the only regions where things have continued to worsen over recent years.

Many of the young people who do have work are nevertheless living in poverty. This is especially true in developing economies. The ILO estimates that, together, the unemployed and the working poor account for two-fifths of the global youth labour force. One in three, an estimated 169 million young workers, live on less than $2 per day. If you move to $4 a day, the figure becomes 286 million.

By our estimate, 475 million jobs will be needed in the next decade to appreciably dent the number of unemployed young people and provide opportunities for the 40 million of them entering the labour market every year.

So, what is the impact of youth unemployment and poor quality employment? We can think of the consequences as both personal and societal.

For the individual, the evidence suggests that people who have difficulty finding their first job can jeopardize their entire employment future. The chances are that they will work in lower-skilled environments and will do it for less money for the rest of their lives.

And it’s not just the individual who pays the price for this lost opportunity: for the whole of society and the national and global economy, productivity is reduced and public health compromised. There is even an argument that some of the social unrest the world has seen in the last decade stems from a global younger generation who, while better educated than ever, is still not able to find meaningful and productive work.

The ILO and the international community have long been acutely aware of the problem of youth employment. In 2012 our International Labour Conference adopted a Call for Action on Youth Employment as an immediate response. Many will know that the 2030 Agenda for Sustainable Development of the United Nations emphasizes youth employment directly in Goal 8. And in November 2015, the UN Chief Executives Board approved the Global Initiative on Decent Jobs for Youth, with the ILO as the lead.

While there is no magic wand that will solve the problem of youth employment globally, there is a great deal that governments, workers and employers can and will be doing to make a difference. The Global Employment Trends for Youth report talks about scaling up investments in decent jobs for young people. I’d like to highlight some of the many ways that countries, with ILO support, are aiming to tackle the youth employment challenge:

Clearly, responding to the challenges of global youth employment will require a tailored and multifaceted approach. However, in all cases, policy-makers must heed the voice of the younger generation. Often it is the young people concerned who understand the measures that will help them adapt in their particular situation.

Young people are often the most robust advocates for those very ideas we all support: an end to child labour and forced labour, equality in the workplace, ecological sustainability and decent work. We can all benefit from that energy and sense of solidarity and social justice.

In the interests of inclusive economic growth and an equitable transition to a more sustainable world, a sharper international focus on the issue of youth unemployment must be adopted. With the right will, we can develop policies to develop the skills and jobs that young people need and deserve.

Every two years the International Labour Organization produces a report on labour-market trends for young people. It’s called the Global Employment Trends for Youth (GET Youth) and the most recent edition makes for sobering reading.

It shows that the reality for far too many young women and men is that there simply aren’t enough decent jobs to go around. Further, as global economic growth remains sluggish, we risk losing even the modest gains of recent years.